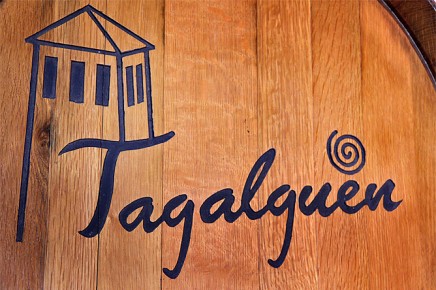 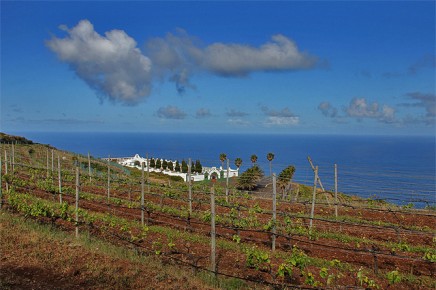 In the coastal área of Santo Domingo, Garafía, in the northwest of the island La Palma you find only a few scattered buildings.

One of them is the Bodega Tagalguén of Juan Jesús Pérez and Adrian.

For 80 years the Finca has not been cultivated, until Isabel González, the granddaughter of the former owner together with her husband Juan Jesús took over the land.

Ecology, sustainability and social economy became the guiding principles of the family project, initiated by the young oenologist and vintner in 2000.

Already in the early childhood his grandmother, who was very experienced in the production of Turrón (a confection) as well as in winemaking had a great influence on Juan Jesús, who originally comes from Tenerife.

Juán attended the Agrarian School in Tacoronte (Tenerife), the College for Viticulture and Winery in Madrid and he graduated in the University Rovira i Virgili in Tarragona.

The biological Finca Tagalguén operates since 2004

The wine press house was built on the site in 2006 and new vineyards were adapted.

A total area of 8000m² is already productive, another area of 4000m² is still “in preparation”. The vineyards in the Subzona Norte are located at an altitude of 340 meters, the soil is loamy and fertile. Frequently, trade winds blow over the terrain, the summer is dry and sunny.

Juan Jesús planted the vine stocks in a way the breeze perfectly aerates the vines on the espaliers.

The processes of pruning, tie up delicate tendrils and soil treatment are performed with expertise and devotion. No pesticides are used, environmental protection comes first for Juan Jesús. He is passionate about working in the fields, even it is a tough job.

Besides the Controlled Denomination de Origin (DOC)the Bodega Tagalguén also received the CRAE-certificate of the Canary Ministery of Ecological Agriculture.

The red wine Tagalguén Tinto Ecológico is one of only two biologically cultivated wines of La Palma. Its grape types Listán Negro and Tintilla only ripen on the grounds of the Finca Gloria. This production in 2014 had a total edition of 2500 bottles. Juan Jesús describes his Tinto Jóven as the “typical Palmerian red wine”.

The wine Tagalguén 100 % Albillo Criollo, whose grapes originate from an additional purchase of a well selected Finca, ferments some time in a French oak barrel.

It is also a solidarity wine. For each sold bottle the Bodega donates 1 kg Gofio (toasted grain) to the Food Assistance Program of La Palma.

Praxis is a wine with a distinctive character made of white grapes and own sun-dried raisins.

The stems are manually removed from the stems and crushed by foot in vats, just like in olden times. From this noble wine there is only an edition of 250 bottles per year.

Tagalguén is the name, the native Canary people gave to the municipality of Garafía

The logo inside the company sign reminds on the typical chimney stacks of Canary kitchens, that over generations were filled with different culinary odours.

The spiral is not only intended to be an appreciation for the Guanchen but also symbolizes Juan Jesús' philosophy.

His aim is that the ecological viniculture continues to expand from this Bodega.

That is why he started a cooperation with other local vintners in 2007.

He pays a good price for the grapes. In return the vintners commit themselves to produce high grapes and refrain from the use of pesticides.

For the production on behalf of the Bodega Tagalguén, Juan Jesús supervises the vineyards and together with the owners plans the vintage date, new plantings, etc.

In August, the vintage time on the Finca Gloria, all family members and friends assist in the harvest 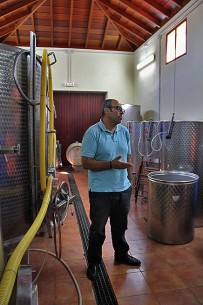 The grapes are carefully cut by hand, placed in small boxes and pressed on site.

This procedures are also performed with utmost environmental awareness. No washing-up liquid is used and the cleaning water is collected and reused.

The additional purchase of controlled grapes runs until October. Depending on the sort of wine fermentation and the aging take place in modern stainless steel tanks or in a barrel.

Even the corks are certified and obtained from controlled sustainable farming with fair wages.

The biological red wine Tagalguén has been included by Joan Gómez Pallarès in the book „Natural Wines in Spain“.

It is the first DO-wine of La Palma, that is described therein as “real pleasure and sustainable agriculture in a glass”.

Another biological product is the honey made by apiarist Juan Jesús.

The honey owes its name to his eldest daughter, Nidia.

Without any doubt Juan Jesús is a young, dynamic and creative vintner deep-rooted in the region, giving the Palmerian wine a fresh and modern touch.

You can visit the bodega

The “young wild one” how he is called in German circles is pleased to welcome visitors in the Bodega Tagalguén.

Still the table is unceremoniously brought out to the terrace, however a larger guestroom is already under construction.

For this purpose a small hill was bulldozed and sustaining walls were erected.

As soon as the expansion is completed the original landform will be rebuilt in order to preserve the natural scenery.

Restaurante La Muralla Aguatavar
Phenomenal view from the dining Area and the terraces - whether you enjoy a coffee, a cake, a quick refreshment or a dinner - you will always have a friendly service. Closing day: Monday

El Jardín de la Sal Fuencaliente
In the midst of the Salines you find the Theme Restaurant, whose name refers to "salt garden".