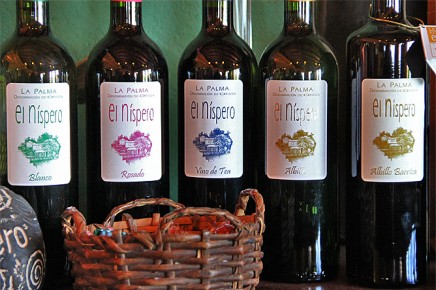 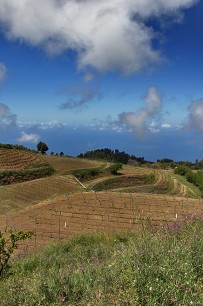 The committed vintner practically grew up with the viniculture and has taken over the vineyards from her father 20 years ago.

Since 1998 her wines called „El Níspero“ are certified with the Controlled Denomination of Origin (DOC) of La Palma.

At the altitude of 1200 meters above sea level, in the region of Briesta, Garafía, the vintner has its own 3,5 hectares cultivation area. It is located in the „Subzona Norte“, one out of three existing wine growing zones of La Palma.

It is a fertile soil with high clay content.

In winter it is damp and chilly, but it is the cold weather that prevents diseases.

From spring to autumn the vines enjoy the sun above the clouds, which typically rise up to about 800 meters.

On the terraced vineyards of Eufrosina grapes are cultivated like Listán blanco, Albillo, Negramoll, Prieto, Tintilla, Castellana, Vijariego and Almuñeco.

Most vines are grown on a free-standing espalier, some are grown in the traditional way called “Vaso”. This technique uses branch forks that slightly lift vines from the ground, which requires the vines to be planted at a large distance to each other. With the “Vaso” method grapes benefit from the stored heat.

Being the first woman on the island, dedicated professionally to the viticulture, Eurforina had to fight hard to stand up to the male domain in the viti- and viniculture.

Even her grandparents held the conventional opinion, that women should not be allowed to enter Bodegas. But Eufrosina’s father had two daughters, and he divulged the viticulture to both of them.

Back then, the grapes still had to be transported to the neighbouring wine press by using pack animals crossing steep terrain.

The wine press was used by various local wine makers to press their vintage, one after another. After pressing the must was poured into goatskin hoses and taken back to the Bodega, where it was be filled into tea-wood barrels and turned to wine.

To this day Bodegas Níspero is a family-owned business

The vineyards and the Bodega are maintained by the vintner and her husband.

Her son Juan Adali, a qualified oenologist is on hand with help and advice.

As time passed the cultivation area widely expanded, modern technology was available, but the old tradition has been preserved as much as possible in order to create extraordinary wines.

The well arranged terraced cultivation area next to the winery allows the use of a tractor cutting and chopping the wildly rampant greenery between the rows.

That way, the soil benefits from the natural fertiliser.

In fact, naturalness is the vintner’s motto.

No pesticides are used

In the early spring, when the vines start to sprout after the yearly pruning, sulphur is applied to the grape vines.

Depending on the type of grape and on the weather conditions vintage takes place between mid of September and the end of October, sometimes even in November.

It is the time when Eufrosina needs diligent helpers, as everything is done by hand.

In productive years about 25000 kg white wine grapes and 20000 kg red wine grapes are harvested. Another 20-25% controlled purchased grapes add up to their own vintage.

All vine grapes are taken to the Bodega, that is located between the vineyards. 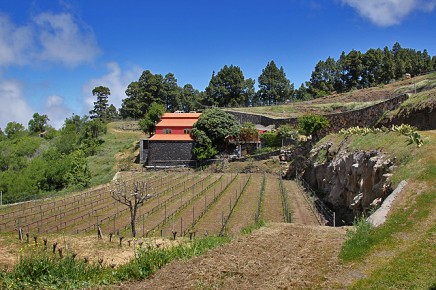 After destemming they are filled into the press through a wine hose.

The wine press is located right in the winery where the maceration takes place.

No yeast is added.

Depending on the type the wine is then filled either in barrels or stainless steel tanks.

The extraordinary red wine „Essencia“ is only available in a limited edition. 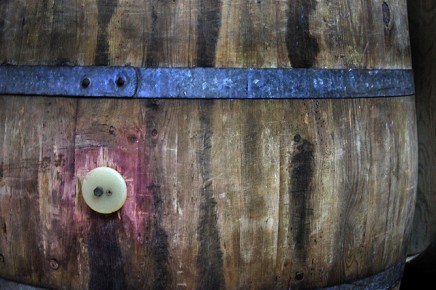 It is pressed from the grape Barbosa Negra, which is a rarely cultivated grape on La Palma. The splendid wine is stored in an oak barrel for two years.

Another speciality is the Tea-Wine, which is certified with the Denomination of Origin only in the “Subzona Norte”.

The two “pipas de tea” are barrels made of Canary heart pine wood and once belonged to  Eufrosina’s father.

The wine is stored in “pipas”, just like in the old days in order to preserve its resinous aroma. But only for 15 – 20 days, as it is not supposed to add too much tea-flavour.

It ferments and ripens in an oak barrel. This vine already received many awards.

The last prize was awarded to vintage 2013. With more than 1500 participants from all over the world in March 2015 the wine was awarded the silver medal at the “Bacchus” in Madrid.

After previous registration the sympatric vintner Eufrosina Pérez Rodríguez is pleased to welcome interested visitors in Bodegas El Níspero who can enjoy her culinary skills as well as the excellent wines.

The well-tended vineyards and the cosy guest room in the bodega invite to a taste all year round.

Restaurante La Muralla Aguatavar
Phenomenal view from the dining Area and the terraces - whether you enjoy a coffee, a cake, a quick refreshment or a dinner - you will always have a friendly service. Closing day: Monday

Pino de La Virgen
Canary Pine Tree with the Sculpture of the Virgin.