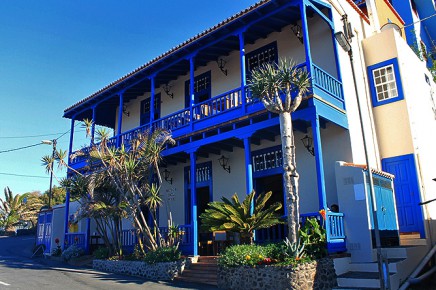 The historic two-story building has been family-owned since 1910. 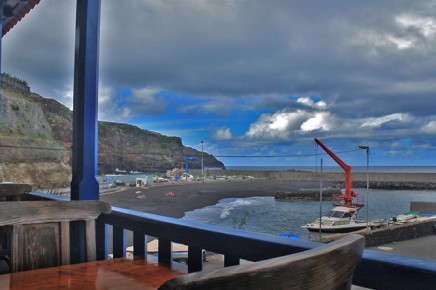 At that time the waters of the Atlantic Ocean reached up to the coast and the salt water lakes served to draw out the bitterness of lupin seeds, soak wine barrels or teach children how to swim.

Despite its small size, Puerto Espíndola had been an important harbour and in the shop „Venta de Juan“ everything was available — from linen footwear to buckets, nails, rice and wine. 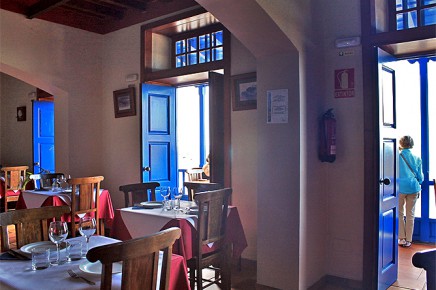 Fishermen often returned hungry from the sea and that was when Juan started to prepare bread rolls and other meals.

Juan Luis remembers when he was a child how after school he used to carry the homemade Mojo Sauce of this Mother from Los Sauces down to Puerto Espíndola.

Following a rigorous renovation in 1989 the small shop was converted into „Mesón del Mar“ and until this day has been a popular fish restaurant for locals, residents and tourists.

On the ground floor there is a small terrace, which is covered by a balcony. This place and also at the contiguous bar are perfect to enjoy a drink or small meal, like Tapas.

On the upper floor there is the kitchen as well as the restaurant facilities. Through wide opened doors light floods into the friendly dining room.

Particularly popular are the tables on the balcony.

They offer a great view of the cove with its small sport and fishing port. The dark sandy beach stretches between the old and the new pier .

The menu of Mesón del Mar includes fish and seafood

Classics are the daily fresh caught fish and the mixed grilled fish plate.

Moreover, you find dishes like calamari in sauce, Piquillo-Paprika with codfish, scrambled eggs with prawns and salmon.

Homemade desserts are prepared creatively by Juan Luis modifying traditional recipes. Two of them are "bienmesabe" with Malvasier wine and the Mousse with Gofio.

The selection also comprises five wines from the Spanish mainland.

Before enjoying your food you might have a bath at the nearby sandy cove or take a walk to the harbour mole.

The interpretation centre for sugar cane and rum is only a few walking minutes away and so are the natural pools of Charco Azul.

From there the „paseo marítimo“ leads to the coastal town San Andrés.