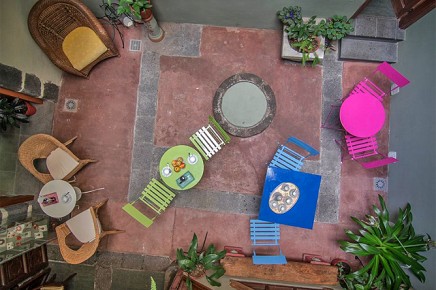 The History of the Teahouse

The physician Franciso Tey from London, husband of the native-born Palmera Isabel Méndez y Mendoza, had the house built between 1718 and 1723 in Santa Cruz de La Palma.

Behind the stone facade there is an inner courtyard, from where a staircase leads also to the main salon with its eye-catching wooden ceiling.

The master builder Bernabé Fernández used blue and white Dutch tiles to enclose the coffered ceiling. The painting then continues on the wooden roof support.

The house was later owned by the photographer Manuel Cabrera Castro (1879-1926) from Santa Cruz.

Many of his historical photos tell about the golden age. His grandchild, the current landlord Manuel D. Cabrera, opened the antique bulding to the public. 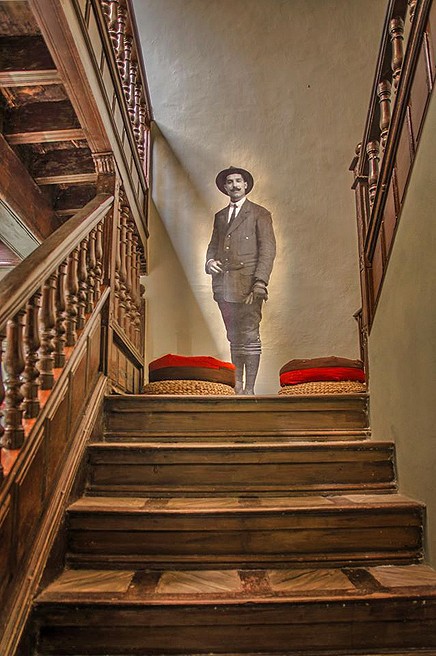 The  „Indianos“ were born in the Tey House

Here, the brothers and sisters Cabrera together with their partners devised the „Indios“ and organised the first relocation of the homecomers from Cuba.

Today the Día de Los Indianos is the highlight of the Island Carnival, which became widely known far beyond the borders of La Palma.

A breath of fresh air from the big wide world fills the premises. 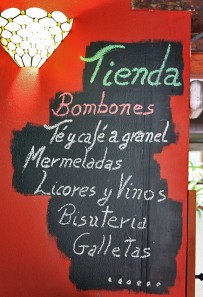 In the shop a selection of tea- and coffee specialities from different parts of the world are sold.

Moreover epicureans find a large range of wine from the Spanish mainland and of course also from the island, as well as local products, which include jams, liqueurs and cookies. 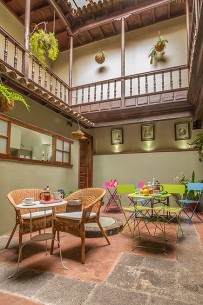 Those who are looking for a lovely gift find also handmade jewellery there.

The inner courtyard or one of the tastefully furnished rooms is a nice place to enjoy a delicious German torte or cake as well as a freshly prepared tea or coffee.

There are also tasty „montaditos“.

They are the ancestor sandwiches and bocadillos (open sandwiches). It is a typical Spanish invention from the 15th/16th century served as a small snack. Montadito derives from 'montar' = arrange, assemble and 'ito', the diminutive form. In fact, it is a slice of bread topped with all kinds of delicacies. You find a big selection.

Casa Tey is located in the Calle Álvarez de Abreu # 57.

Sometimes interesting activities take place in the Casa Tey like: The 20's in La Palma, an antique photo exhibition or a cooking experiment of a potato recipe from the 19th century.

Manuel Manuel Cabrera takes pleasure in opening his house to visitors and for special events on special occasions -  the worth-seeing salon.