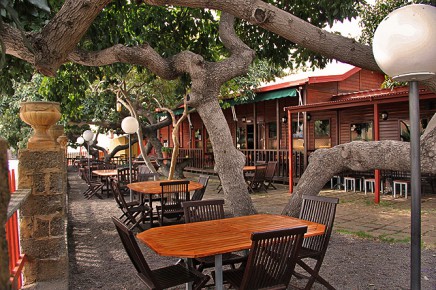 It is a great place to enjoy delicious corn pockets „arepas” or corn dodger „cachapas” with different savoury fillings and a spicy or mild „guasacaca” - a homemade sauce made from avocados grown on the Finca.

Arepas are round shaped fried corn pockets that have been were brought to the Canary Islands by Venezuelan immigrants.

In America they are eaten regardless of the time of the day, served together with a main dish, as a snack or for breakfast.

Cachapas are a typical Venezuelan dish as well that is enjoyed on different occasions.

They are prepared with sweet corn and roasted. Like the arepas they can be combined for example with chicken- or egg salad, tuna, cheese or meat.

Cachapas are also served with a mild or hot "guasacaca" avocado sauce. 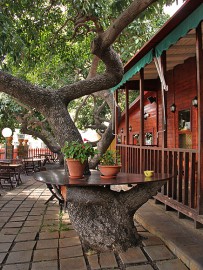 The Finca that was bought in 1930 by Francisco González, grandfather and owner of the restaurant "Arepera El Jable", was much larger then than it is today.

The first avocado tree of the Finca, located at the entrance, has been planted by Francisco in 1940.

This avocado type is called „aguacate del país“. All the other "aguacateros" were planted later in the sixties.

Lager parts of the Finca were sold to the municipality Los Llanos de Aridane, that later built a public swimming pool there, a football stadium and parts of the Avenida Enrique Mederos.

The piece of land, where today you find the supermarket "Hipercentro", was part of the Finca, which belonged to the great uncle of the five brothers and sisters, who opened the Arepera.

Francisco González Herrera, the father of the González sisters and brothers was a Marina warrant officer and also landed in Venezuela. There he met Numidia Bajares, returned together with her and started a large family. 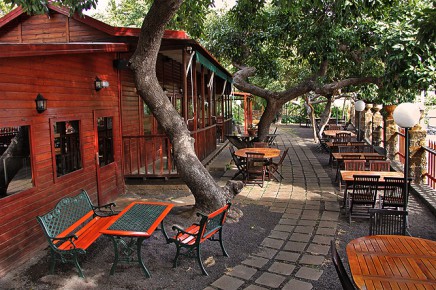 In 1970 Francisco imported glass from the Netherlands and built greenhouse. From now on he dedicated himself to agriculture and its further development.

Where today there is the parking area in front of the restaurant, in former time a huge greenhouse was located - the ground wasn't even, there was a canyon, span."barranco".

Nowadays, during carnival season, you find amusement rides there with bumper cars and merry-go-rounds. Francisco sold the land in 1984 to the municipality of Los Llanos de Aridane.

In 1992 the third Francisco opened a summer terrace  (terraza de verano) on the front part of the remaining property.

It is said that the party location was very "productive" as this place brought together many couples, whose children today come to enjoy the Arepera together with their parents.

Later in 1996, Francisco and his four remaining sisters and brothers opened the Arepera El Jable.

First the extensive menu included also many meat dishes. But soon the family focused on arepas and chachapas in order to ensure their guests freshness, quality and prompt service.

Since then, Francisco works in the open kitchen and roasts chachapas, while his brother Javier fries arepas.

Arepas are made from cornmeal, water, salt and olive oil. They are also suited for those who cannot take any gluten. Chachapas are made of ground yellow corn, milk and butter. Milk can be replaced by a soy product if preferred.

Homemade desserts are prepared with lots of love by Francisco's sister Barbara.

The kitchen of the Arepera is open and visible for the guests, who can convince themselves of the restaurant's cleanness.

Those who like to try authentic Venezuelan dishes will enjoy the great service -mainly by the great grandchildren of Francisco.

There is a wheelchair-friendly access to the toilets. Moreover, you find plenty of parking facillties, the bus station is only 50 meters from the restaurant.