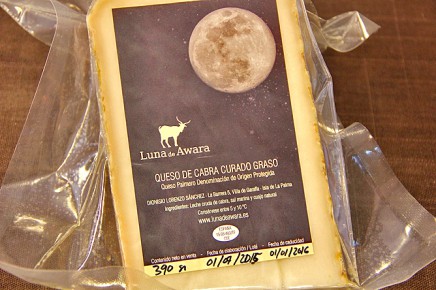 Quesería Luna de Awara is located in Garafía, nestled in the evergreen north of the island.

Everywhere on Dionisio Lorenzo's goat farm you find plants of the laurel forest and the zone of tree heath - sweet gale bushes. His 200 goats therefore are provided daily with freshly grown pasture.

It is called „Monte“ and additionally animals are fed with Tagasaste, Arabian pea, oat, barley and wheat bran, depending on the time of the year.

For Dionisio using prefabricated feeding stuff like pellets is not an option.

Dionisio follows in his parents' and grandparents' footsteps and nobody really knows how far into the past this knowledge and passion can be traced back.

The independently recognised goat breed „cabra raza palmera“ is very well adapted to the rugged grounds of the island. Experienced breeders found out, that classic music makes a positive impact on their sometimes nervious behaviour.

Moreover, a combination of animal housing and pasture gazing creates a healthy balance for the goats' wellbeing.

Working days are long and usually take about 12 hours, 365 days a year  - however, Dionisio loves his work and his animals.

One of them, Rafael, is a self-employed agronomist.

He supports his father playing an important advisory role and another employee assists the „cabrero y quesero“ (goat breeder and cheese producer) Dionisio in feeding and taking care of the goats.

The quantity of milk per goat averages a liter. However it varies with the seasons and with the amount of pregnant or nanny goats.

Smoke from rotten wood of the Canary pine tree and its  needles give the cheese its incomparable flavour.

Customers can choose between the young, and mild „queso tierno“, the aromatic, fully ripened „semicurado“ or the spicy hard cheese „curado“.

Luna de Awara means „Moon of the Auaritas“ — and this does not only refer to the shape of the cheese loaf, reminding on a full-moon.

They were the ones who already climbed the highest mountain peak along with the ancestors of the „cabra palmera“ looking for food.

That place today shows the cupolas of the Canary Island's Astrophysical Institute  You can catch sight of some of them from the cheese dairy.

As a result of the Nighty Sky Protection Act you can observe thousands and thousands of stars. Even above the farm they seem to be within one's reach and the cheese dairy is connected to the star gazing tourism.

Some beautiful hiking trails wind through the landscape and the Parque Arqueológico La Zarza with its famous petroglyphs of the native people is located only 1 km from the cheese dairy.