Ripened on the Island – The Palmerian Viniculture

The vine stocks were cultivated by European settlers in the area of Los Llanos and the Caldera de Taburiente. 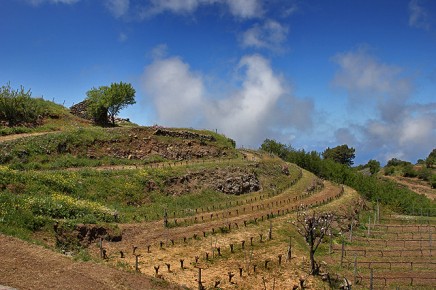 The soil and the climate were particularly favourable to the vines so that further vineyards with different varieties emerged. By mid of the 16th century the Palmerian wine has already been exported, mainly to England and its colonies.

At that time until the 17th century La Palma rank third most important harbour of the world after Seville and Antwerp.

Besides other commercial goods the wine export trade flourished and now extended to Flanders, America, Africa and Germany. For almost 300 years wine was the island’s most important source of income.

In the 19th century the powdery mildew caused immense damage.

Fortunately the vines on the secluded island were spared from the phylloxera plague, which had a devastating effect throughout Europe. Despite of the sales decrease the Palmeros stayed true to their wine.

In the 1950’s it was the more profitable mono culture of bananas, that finally put an end to a large number of vine stocks in the coastal areas.

However, wine has always been a part of the life culture and therefore many farmers continued to cultivate their vineyards.

They produced their special house wine “vino de casa“, partially of grape varieties, that had ceased to exist in their country of origin for a very long time.

In the year 1994 the certificate of origin “Denominación de Orígen“ was implemented and revived the interest in the viniculture.

Meanwhile, old vineyards, that laid fallow were re-cultivated. New vine stocks, which are subject to strict variety controls, have been planted and vineyards still continue to grow.

The difficult orography of the island makes the use of machine on the rough terrains almost impossible.

That is also why there are many, small Bodegas with a traditional operating method and some larger wineries, who skilfully combine craft tradition with modern techniques.

The Palmerian wines and the viniculture are patronized by different entities...

— Just like the La Palma Wine Club does: Its initiators organize wine tasting events of typical island wine on a regular basis.

This topic seemed of further interest to la-palma.travel, so that we have visited some Bodegas and will continue to do so, in order to present them to you.

This will offer you the opportunity to look beyond the wine bottle label and get an idea from vintners, cultivation areas, grape varieties and the production process.

Ripened on the Island – The Palmerian Viniculture - La Palma Travel