Midsummer on the Beautiful Island

— The summer solstice gives us the longest day of the year and at the same time the shortest night.

It always takes place in the northern hemisphere on a day between 20 – 22 of June. It is followed by three days when the sun rises and sets in the same place. It seems to stand still.

Even the aboriginal people of La Palma gathered at places of worship to honour this natural spectacle. Rock engravings, channels and hollows in the rock are silent witnesses to ancient rituals. 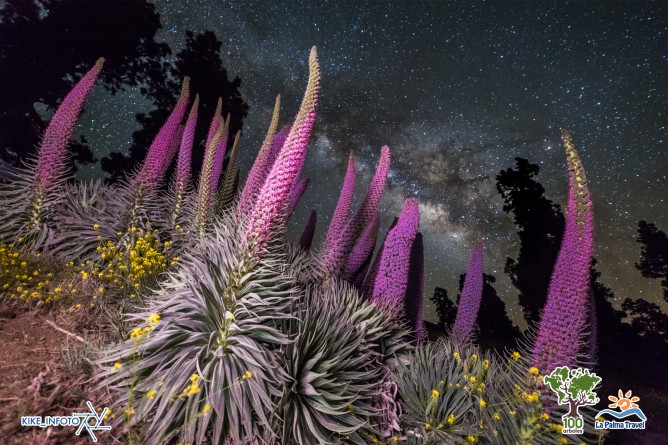 Due to its proximity to the equator, the sun sets on La Palma at around 9:15 p.m. even on summer nights, and the nights are dark and pure. It is a magical time.

It stands for knowledge, fertility, love, community, but also for letting go. Flowers and medicinal herbs are harvested. Bonfires on the beach and swimming in the sea at night are part of the customs of St. John's Eve (24.6.) on La Palma today.

Kike Navarro's photo symbolises the change of seasons. The viper's heads mark the end of spring, while the sky shows the summer Milky Way. With its clearly visible galactic centre, it rises majestically among the flowers and pines.