This songbird hunts insects all over the island of La Palma, twice a year it lays eggs in its cosy nest, which is shaped like old ovens.

The insect hunter, which measures between 10 and 11 cm, is one of the smallest songbirds on the Canary Islands. 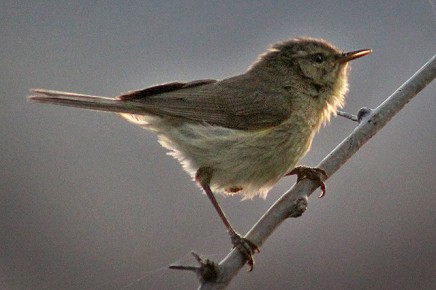 The upper side of the male is pale olive green, the underside yellowish. The female is medium brown above and pale greyish brown below. Both sexes have a pale stripe above the eyes.

On La Palma, these lively birds can be seen everywhere where there are trees and bushes, from the coastal area to the mountainous regions.

Their name "mosquitero" comes from their appetite for insects. Sometimes they swoop down from a branch into a swarm of mosquitoes to "stop" in the middle of it with incredibly fast wing movements and eat as many as possible.

It also likes berries and fruits and is one of the birds that replace hummingbirds in pollinating exotic flowers.

It climbs into the large flowers of the Canary bellflower, pecks at aloes, strelitzias, hibiscus, etc. The plants reward him not only with the captured insects but also with sweet nectar.

The song of the Canary Island Chiffchaff, apart from the monotonous "chip-chip-chip", also consists of the sounds "chivi-chivi".

The "mosquitero" builds its ground-level nest of dry grass, leaves and pine needles well hidden between bushes. Inside it is padded with feathers, animal hair and soft plant parts.

The only entrance is a hole in the side. This is reminiscent of the shape of the old "horno" ovens, which is why the Palmeros call the bird "hornero".

The mosquito hunter and the bird flower by Kike Navarro

On the Canary Island of La Palma, the table is well set for insects even in winter.

However, some plants are poorly suited for pollination by bees etc.. They attract birds like the Canary Island Common Chiffchaff with their showy flowers. Kike Navarro captured such a moment for us.