The Yellow-legged Gull and its Atlantic Subspecies

The "patiamarilla" has yellow legs and feet, both parents, female and male incubate eggs either in colonies or in secluded breeding areas. On La Palma those gulls are found along the entire coastal area.

While the yellow-legged gull is spread over large parts of Europe, the Atlantic subspecies is found on all Canary islands, on the Azores and on Madeira. The two species are tough to distinguish.

Amongst other characteristics, the Atlantic species features a darker back plumage.

Its Spanish name „patiamarilla“ refers to its yellow legs and feet.

A striking feature is the bright red spot on the yellow, lower peak near the tip.

The animals reach 55 to 67 cm length and have a wingspan between 135 and 150 cm. Adult birds' breeding plumage is coloured white on their head, neck, collar, underbelly and tail.

Around their eye you can see their distinctive red ring.

Their body's upper side is grey and so are both wings, other than the white front and back wing bars. Primary feathers show a whitish and black pattern.

During spring they build a hollow and cushion it with feathers, seaweed and plant parts.

Partially birds breed in colonies, however there are also monogamous partners who prefer to breed in a secluded area.

Both parents, the female and male incubate their 2 - 3 eggs and their offspring hatches within 25 - 30 days. The two parents continue to care for the chicks until they are about 6 weeks old and become independent.

The colour of the young birds' plumage is differently nuanced and it takes about 4 years until it matches the adult ones. 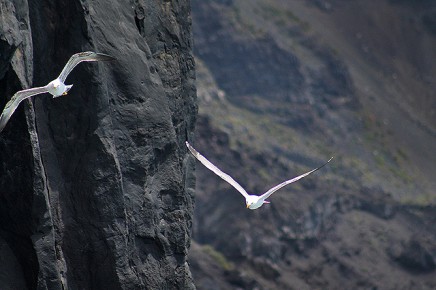 On La Palma you are lucky enough to see „gaviotas“ around the entire coastal area and in the vicinity of ports.

Sometimes they spend hours near larger water basins like the Laguna de Barlovento.

Gulls eat fish, tuna, crustaceans amongst others, sometimes also eggs from other birds, garbage or carrion.

At rare occasions gulls touch ground on fields to look for snails or other small animals.