Short Hike: On tour in Barlovento

From the Water Reservoir to the Dragon Trees

The comfortable hike takes about 2 hours there and back.

First we take a walk through the grounds of the recreation park La Laguna de Barlovento.

From a wooden viewpoint we enjoy a spectacular view towards Los Sauces and the coastal landscape down to Puntallana.

Sometimes even the Pico del Teide, the highest mountain of the neighbouring island Tenerife, appears in the background. We enjoy a coffee at the Restaurant Las Goteras and then exit the park.

Making a right turn we walk along the side of the small paved road, that goes past a water reservoir, which has a storage capacity of 3.5 million cubic meters of water.

At the viewpoint Mirador de La Laguna we climb up the stairs to enjoy a view over the entire area.

Shortly after, a tall pine tree appears on the right. From there we follow the hiking trail PR-LP 8, crossing farmland until we reach the Hotel La Palma Romántica. Once there, a narrow path bordered by tree heath leads down to the village entrance of Barlovento.

Right in front there is the Restaurant El Asador del Campesino and a big trail map.

From there we follow the rarely used country road towards Garafía until we come to a blue sign on the right that marks a bus stop.

Not far behind, a signposted earth road leads to the right.

We follow this road and at the same time the coastal hiking trail GR 130 that goes past a few houses and shortly after, turns left into the path to Gallegos.

Many butterflies flutter around and the songs of the blackbird, the Island Canary Bird (serinus canaria), the chiff-chaff and the warblers echo through the small canyon. 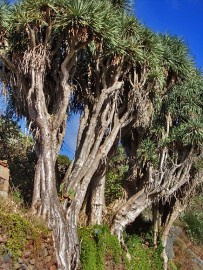 They exist only on very few places on earth. This unspoilt plant once was a life base for the people of La Tosca. Leaves were fed to cows but were also processed to make ropes and be sold later.

From here we enjoy a wide view of the entire north coast of the island.

We leave the stairs up the Mirador de Tosca on the side for the moment, and continue the path that turns into a paved road.

At the intersection, following almost immediately afterwards, we keep to our left and continue to the spring La Tosca featuring antique washing areas.

At this point we exit the trail GR-130 and continue a quite small uphill road. The brownish bedrock is called "tosca".

It was broken down in rectangular blocks and used as a building material for homes and sheds.

At the highest peaks of the mountain range, on clear days, we can see the domes of the Astrophysics Institute.

Our small road reaches the trail LP-1 and we keep left to return to the village.

At the Mirador de La Tosca we reward ourselves for the long asphalt walk with a magnificent view of the ocean and the small hamlet with its "dragos".

The road now almost flattens and in a few minutes we are back to the big trail map.

You may want to make a stop at the Campesino, before we return past the hotel and back to the park La Laguna.