The Character Bird of the Canary Island La Palma is the “graja” (pronounced: gratsha)

The "graja" — La Palma's emblematic raven of the high mountain regions  — can be identified by its red beak, that has a yellow colour for young birds, fed by both parents. 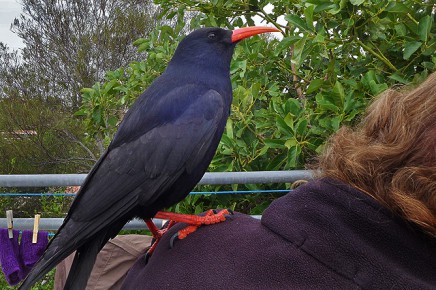 The graja belongs to the raven family and is easy to identify.

Its silken plumage is black, sometimes shimmering metallic-blue and green.

The long beak is thin, bent and bright red.

Also its legs and feet are red. The body length of the red-billed chough is 39cm, and its wingspan 73-90 cm.

The emblem of Puntallana also shows the graja and legend says that the first Red Billed Chaugh appeared in this village. From there the birds spread all over the island.

They are particularly seen in the west near El Paso but also on the Roque de Los Muchachos.

The Red-Billed Choughs are excellent flyers, who are comfortable in the high mountain areas.  Alpenkrähen sind sehr gute Flieger, die sich im Hochgebirge wohlfühlen. They are home in the steep and rugged landscapes. 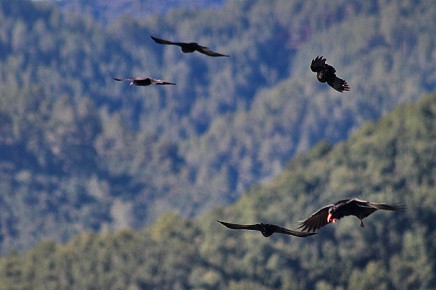 Sometimes they start a fight with hawks or common buzzards.

The animals live and often fly in large groups.

During certain weather conditions when they fly down to lower areas, you can hear their birdcalls.

There is a typical metallic "kijarr" sound.

Sometimes dozens up to hundreds of birds who settle together, for instance on a freshly ploughed land.

They are mainly insectivores and look for beetle larvae, spiders and grasshoppers.

Fruits and seeds make up just a small part of their diet.

Grajas nest in loose colonies in the Barrancos, in Cracks and Holes

Some also like it more quiet and build their nest on high palm trees in the gardens.

The female bird breeds alone and only lays 3-5 eggs a year in her nest, built of plant parts.

The young ones hatch out in April and are fed by both parents for 4-6 weeks, even some time after leaving their nest.

Young birds can be identified by their yellowish beaks and the light colour of their legs.