Unfortunately,  in particular young animals of the exemplary Canary bird are threatened. The organisation "Amigos de la Pardelas" tries to sustain the bird's population on the archipelago.

It is the time of the Cory Shearwater.

For much of its life the sea birds spend on the open sea of the equatorial and southern Atlantic Ocean.  For reproductive purposes, the migratory birds visit their breeding grounds on the Azores, Madeira and the Canaries. 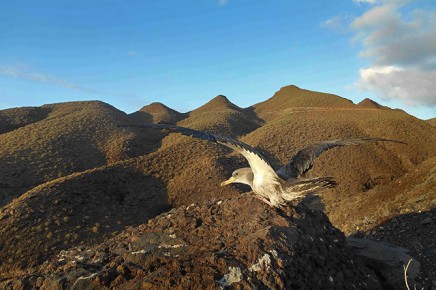 Their scientific name is Calonectris Diomedea.

In Spanish they are called pardela, pardela cenicienta or tapagao. Tail, neck and legs of the „pardelas“ are short and there are webs between their front toes.

Their long, narrow wings feature a span length of 112 - 126cm, which enables them to glide through the air for hours and hours.

Adult birds have a light-grey back. The ventral part is white, except the dark edges of the wings. The tip of their beak is black and bends downwards. It is made out of horn-parts.

The elongated nasal cavities serve to eliminate of the salt content, soaked up with the sea water.

Many times this happens near the coast or on the cliffs, rock islands but also further inland in the rock shelters of the Barrancos. 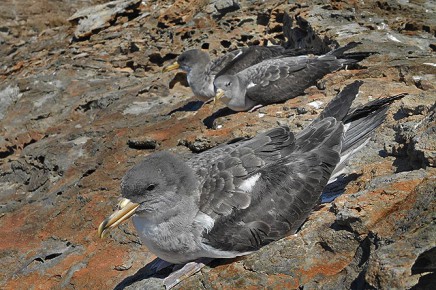 The chick hatches around mid of July, well hidden in a volcanic tube, a rabbit hole or in a rock crevice.

During the day its parents are at the sea hunting for fish, crustaceans and squids.

Later, under cover of nightfall, they return to feed their offspring. This is the time of the bizarre calls resounding through the air.

On La Palma you can watch the Cory Shearwater passing by, for example in the area of Fajana von Barlovento, near Puerto Espíndola and on Playa los Guirres.

For many years, with the aid of thoughtful citizens, many sea birds suffering severe injuries could be rescued.

Although the Cory Shearwater is the exemplary bird of the Canary Islands, its population on the archipelago has alarmingly declined.

Rats, feral cats and also two-legged poachers are accountable as well as many lights dazzling from surrounding villages and coastal towns.

When birds leave the island by mid of October/beginning of November to migrate to South America, particularly young and unexperienced animals are endangered during their first flight.

The large quantity of lights from towns, villages and streets can make them lose their bearings and fall down dazzled to the ground. 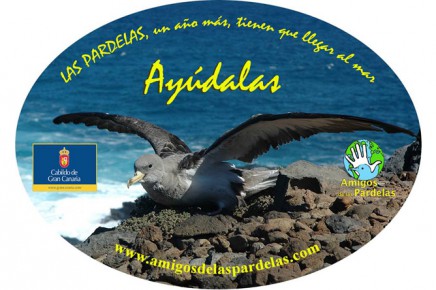 „Pardelas“ sure are excellent divers, but once they hit the ground they are clumsy and have a hard time to take off again.

That is why they are defenseless towards dog attacks, and towards vehicles overrunning everything as well as when they are abandoned in lonely places at risk of starvation. It is for this reason that volunteer helpers on Gran Canaria founded the "Asociación Amigos de la Pardela cenicienta“.

There is a well established network on the Canary Islands of this voluntary association and from mid of October to end of November friends of the Cory Shearwaters are in action.

Regulations for night sky protection, which applies in La Palma, not only is a pleasure for the staff of the Astrophysical Institute and enthusiasts of astro-turism, also the Cory Shearwater birds benefit from this law and the dark nights on the Isla Bonita. 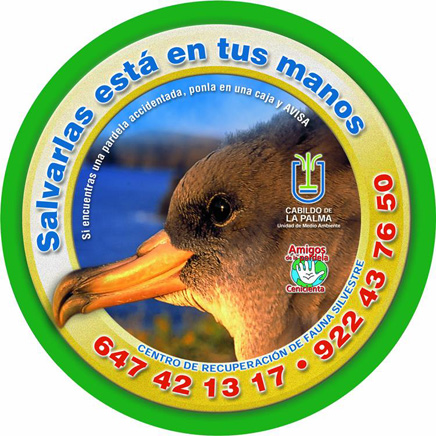 The bird will then be handed over to people with expertise and eventually will receive veterinary attention, in order to be allocated and released and as soon as possible.

For more information (in Spanish) and photos visit: