The Kestrel certainly is one of the most seen Bird of Pray on La Plama.

The Canary Kestrel is often spotted on La Palma, it settles on the coast, in the mountrains, forests and volcanic landscapes.

On the central and western Canary islands the Common Kestrel, falco tinnunculus, developped the subspecies canariensis. 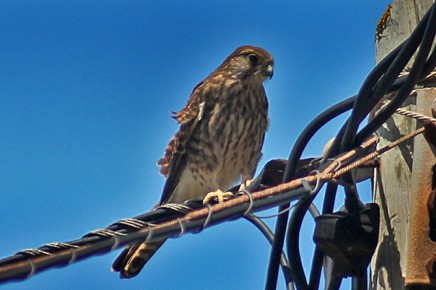 From the local subspecies the male has a reddish-brown back with black spots; the underside shows an ochre or lightly reddish colour.

Body and tail are grey, the tail features a wide, black patch.

Females have a reddish-brown upper side with dark cross stripes, instead of spots. Their tail has a reddish colour and also is cross-striped.

Kestrels are frequently spotted on cliffs when gliding or nose-diving.

Their preferred nesting places are rock shelters, sometimes Kestrels also breed in Canary pine trees, in palms or even in dragon trees.

Females breed between 4 to 6 Eggs during 1 month

Both parents feed their offspring for about 3 weeks and even afterwards the family stays together for some time.

Lizards, mice and insects like crickets and beetles are their basic food resource. Once in a while they chase small birds.

Whenever ravens or common buzzards enter their territory they are scared away by turbulent flight attacks.

The Fauna on the Canary Island La Palma

The Fauna on the Isla Bonita Read more...

Even you might not suspect at first glance, the fauna on La Palma is extremely rich in species.

Partially, endemic subspecies have developed, of which most are native only on the Canary Islands and some on a certain island, even in completely restricted areas. Read more...