Despite of its name, the Indian Laurel is not part of the laurel family (Lauraceae), but belongs to the mulberry family (Moraceae).

Its native habitat are the Tropics in Asia. Ficus microcarpa (synonyms Ficus nítida or retusa) in English are also known as Chinese Banyan or Curtain Fig.

It is an evergreen tree and grows 10-30 meters tall.

Its leaves are small and sturdy, dark green and shiny. The smooth bark of the strong trunk is light grey and sometimes aerial roots are formed.

The small blossoms are whitish yellow and the globular fruits change colour from green to dark and are eaten by birds.

Between America and Europa the tropical tree also found a new home on the Canary Islands.

Magnificent specimen are found on the Plaza de España in Los Llanos. Already by mid of the 19th century, Palmerian emigrants sent seedlings from Cuba to the island by ship. 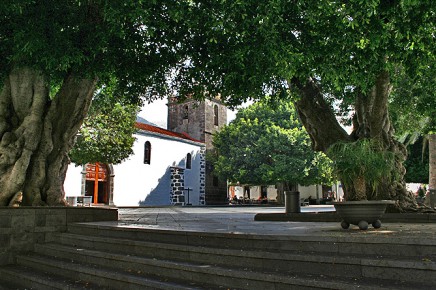 The popularity of laurel trees is proved by the fact, that they are found all over the island except in Los Llanos.

Mild temperatures on the Canary Islands have a positive impact on its flourishing.

"Laurel de Indias" grows in the sun or partial shade and benefits from a fertile and well drained soil. Laurel trees neither tolerate temperatures below 15 degrees Celsius nor frost. However, dry climate doesn't cause him any harm. 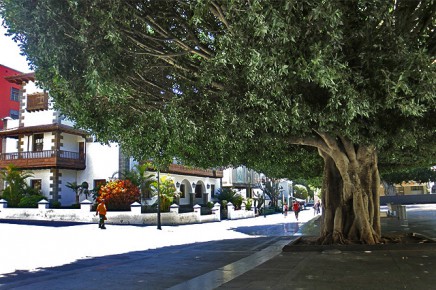 Ficus microcarpa is also well suited as a bonsai or pot plant for the terrace and winter garden.

However, during the winter months it must be switched to a warmer place. Laurel trees can either be grown from seed or propagated by cutting.