As a Macaronesian endemite the Canary Holly is found not only on the central and western Canary Islands, but also on Madeira.

Worldwide there are close to 600 species 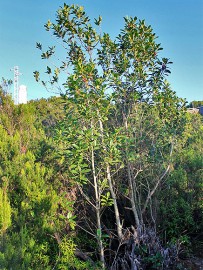 Most Holly species grow in the tropics and subtropics of the New World as well as in East Asia.

Depending on its location the evergreen „acebiño“ grow as a shrub or tree and can be up to 10 meters tall.

Its bark is grey-white and has light spots. The wood is very hard and has been used to make tool handles and other utensils.

On La Palma the slow growing tree is found in the laurel forest in Monteverde and in the dry Tree-Heath-  (fayal-brezal) zone - between a height of 600 to 800 meters.

In the damper Barrancos you can find the Canary Holly already at a height of 300 meters.

The oval (egg shaped) leaves are approx. 6 to 8 cm long and leathery coarse.

The upper side has a glossy green appearance, the backside is brighter and its margins are smooth. 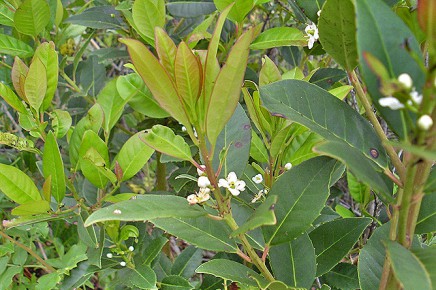 There are mainly new shoots, who have dented leaf margins.

In April / May the small, white blossoms open.

The „acebiño“ is dioecious. One plant carries male flowers, the other the female ones - and thanks to the bees pollination works just fine.

From October on you can spot the berries.

They reach a diameter of about 1 cm and during winter they change their colour from green to bright red, later on they turn dark red.