The Descent of the Virgin of the Snow

On the Canary Island La Palma, it is said, time elapses in quinquennials, as the Virgin of the Snow is believed to descent only every five years on the capital of the island.

The significance of the Fiestas Lustrales becomes evident by the hustle and bustle in Santa Cruz.

Preparations already start at the beginning of the year when houses get renovated, repairs are carried out, the town beach is cleaned up and street decorations are designed. Everything must be spruced up when the patron saint of the island arrives.

The virgin's coming is followed by thousands of visitors from all over the wold. Most of them are people who have once left the island to find their luck elsewhere. Tourists also participate in the numerous events that take place between the end of June/beginning July and the end of August. 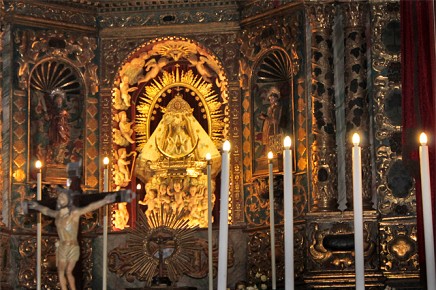 Usually the multi-coloured terracotta statue of the Virgin is kept in the Pilgrimage Church Las Nieves, located in the upper part of Santa Cruz.

The Virgin of the Snow statue is 82 cm tall and was built in late Romanesque transitional Gothic style. It has been dated to the end of the 14th century.

The statue arrived in La Palma before the Spanish Conquest and has been worshipped in a cave by the benaoharitas, as the native inhabitants of La Palma were called. 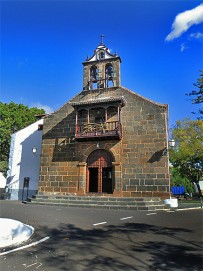 For centuries the island's inhabitants have been asking for succour from the Virgen de Las Nieves.

They carried her statue out during volcanic eruptions, firestorms as well as during droughts and the virgin even performed some miracles.

Reasons enough for the Canary bishop Bartolomé García Ximénez to initiate the quinquennial processions as from 1680.

The believers' gratitude for the patron saint of La Palma is manifested by her fine dresses, precious jewellery, gold and silverware.

Supposedly she is the richest woman on the island.

The Bajada de La Virgen de Las Nieves is officially opened by raising the flag of the Virgin at the church Iglesia de Encarnación followed by carrying down the disassembled silver throne weighing several tons.

At the beginning young and old are enchanted by the pandora (latern procession), in which the main actors are the children. 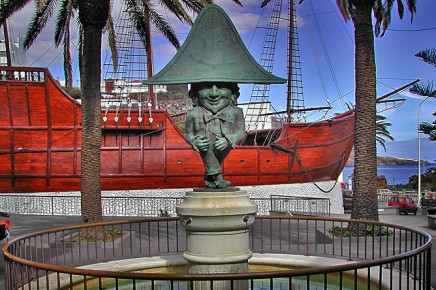 On Tuesday the acrobats come on stage,  on Wednesday the minué (minuet) is performed and on Thursday the popular Danza de Enanos (dance of the dwarfs)  takes place. On Friday the performance of the Carro Alegórico y Triunfal (allegorical stage play) puts the audience in mood for the Bajada.

Many believers set out to walk all the way to the church de Las Nieves. Some of them have taken their vows proving their gratitude to the Virgin.

On Saturday tens of thousands pilgrims convoy the Virgen de Las Nieves 6 km to the capital.

A blazing summer heat blends with moments of adoration, strains and fizzing emotions.

The Virgin's Marching into the capital takes place in two parts

The night of Sunday she spends in the church La Encarnación. Next morning the Bajada continues.

There is an important stop at Barranco de Las Nieves where the 'diálogo entre el castillo y la nave' (dialog between the fortress and the ship) takes place. The voices echo from the upper castillo, over the canyon and across to the replica of Columbus' ship Santa María on the Plaza de Alameda. 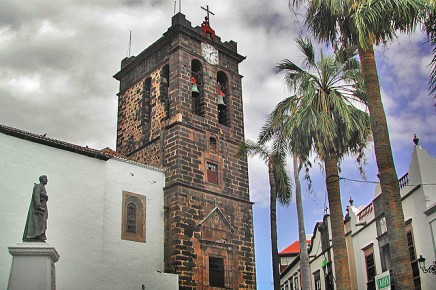 The defenders of the city receive the ship with angry voices, until the dialog reveals that instead of pirates it is all about the Virgin Mary who is on board of the ship. This scene is followed by the saluting gun shooting and the procession ceremoniously enters the town.

Until August 5th, the Virgen de Las Nieves remains in the church San Salvador on the Plaza de España, afterwards she returns back to her sanctuary, ascending Las Nieves together with a convoy of pilgrims.

The virgin leaves behind more than 40 days filled with devotion, excitement, sport, music and traditional events while the Palmeras and Palmeros already long for the next quinquennial.

The Virgin of the Snow is believed to descent only every five years on the capital Santa Cruz — and this year it is happening again.

While there is a holiday each year on August 5th, which is the day the patron saint is worshipped and celebrated, the festivities take place in 2015 from June 28 to August 5.

In order for you to become part of this important festival we will keep you informed over the next months.