The island La Palma is known for its almond blossoming during January and February, enchanting mainly landscapes at average heights in the northwest of the island.

Shortly after the conquest, by the end of the 15th century, the first almond trees have been brought onto the island by new settlers. From the incredible biodiversity almost 40 species have suvived until today.

But how do Almonds ripen and how are they handled?

First of all they certainly have to grow and mature naturally.

For this reason, a tender, green seed pod is formed after flowering. The young hull more likely reminds of a peach.

This is the protecting coat for the desired seed core.

While fruits grows up in the summer sun until the autumn, a woody shell forms around.

Seed pods become thicker, harder and turn into a brownish colour. From mid/end of October, depending on the weather and degree of ripeness,  the outer coat bursts open.

Therefore, a kind of net is spread underneath the tree to catch almonds that are knocked off with a stick. Dry weather is perfect for harvesting.

In former times, hard shells have been cracked laboriously by using a hammer or stone.

You can still observe this procedure during the annual Almond Blossoming Festival in Puntagorda, which is even a discipline in a competition.

Harvesting in sacks requires the use of appliances... 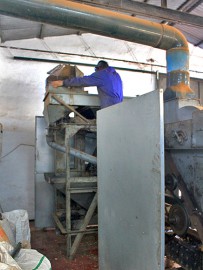 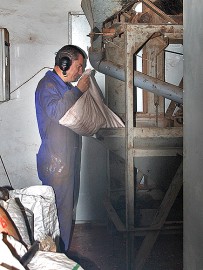 It is convenient that Puntagorda has its own almond cracking machine.

In 1963 the "Cooperativa Agrícola Virgen del Pino“ was founded.

At the beginning, this place was used to prepare and pack tomatoes from this region for sale, explains Carlos Manuel Martín Pérez. 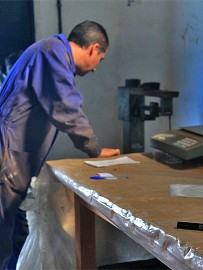 Most of the cooperative members meanwhile are seniors, but also foreign residents bring in their harvest. 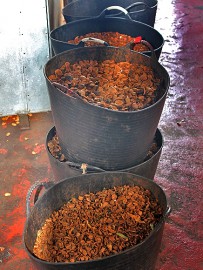 Either the cooperative buys those almonds or owners pick up their cracked-open almonds later.

The Ayuntamiento of Puntagorda also stores up in order to share out almond seeds to the visitors during the Almond Blossom Festival.

Even if almonds are found everywhere around the place, Carlos keeps track of all sacks and buckets.

He knows exactly which almonds belong to whom and splits them by owners and sorts, before filling them separately into the machine's gullet.

It is a noisy and rattling procedure to separate seeds from their shells before the machine spits them out in special containers.

Private persons and bakeries use their harvested almonds to produce almond cheese, almond paste, almendrados, bienmesabe, rapaduras and other treats. 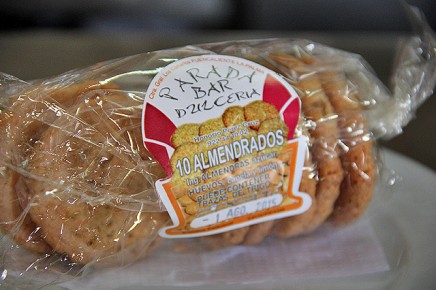 Almond shells are sold. They are popular for smoking goat cheese or for composting and are also used as an isolation material, for example for the floors of caves.

For many centuries profits from the cultivation of  from Prunus dulcis contributed to the income of the people of La Palma.

In the 1950s the export peaked by its extension to the United Kingdom (UK).

A practical procedure - however, it has a crucial pitfall. 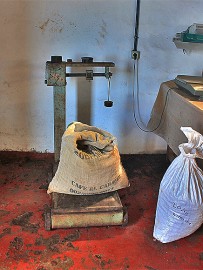 In case you fail to practice tree maintenance and remove shoots, by tearing them away below the grafts, you possibly harvest original bitter almonds.

Those are industrially used in other countries but are absolutely bad for La Palma.

Just a tiny amount of bitter almonds in the sack makes it unsellable.

During the grinding or mincing process of sweet almonds the bitter taste ruins the flavour.

Preferable, other trees of the rosaceous family are used for grafting, like plum or peach. 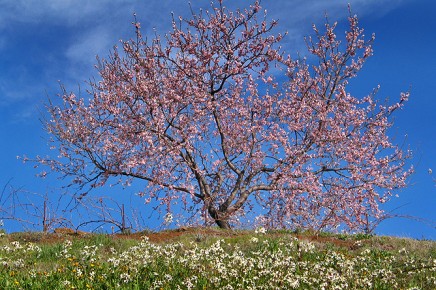 They have to be trimmed every 2 years, otherwise they start "ageing".

Thereby at first small twigs slowly wilt, followed by entire branches. Almond wood is a is an excellent firewood, after all.

Additionally terrains have to be kept grass-free.

Otherwise this could lead to fungus attacks, which destroys trees.

Unfortunately, due to the absence of tree care more and more almond trees are endangered.

It is a great pity, as Palmerian almonds due to the moderated, subtropical climate are of excellent quality.

Although they are more expensive, than those imported from competitors of California, Palmerian people prefer local almonds.

They are part of a healthy diet and the amount of old people on La Palma seem to be a prove that.

For local people almonds, figs, Gofio and goat mild or goat cheese are part of their basic food.

A special natural spectacle is the almond blossom. Kike Navarro shows us a beautiful night shot of a young almond tree in full splendour.

With this night shot, Kike Navarro shows us one of the winter natural spectacles on La Palma.

Almonds of the cooperative from Puntagorda are registered under the name „Cooperativa Agrícola Virgen del Pino“ and are sold at following places: