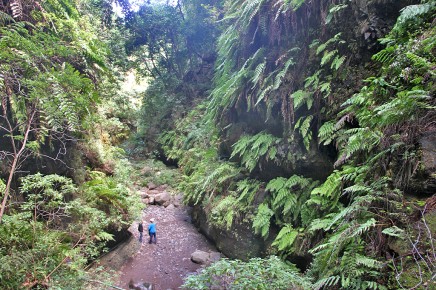 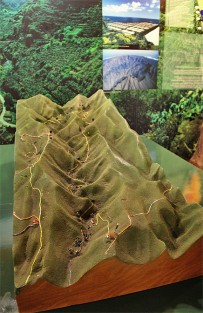 Numerous hiking trails lead to viewpoints or deep into the enchanted jungle. 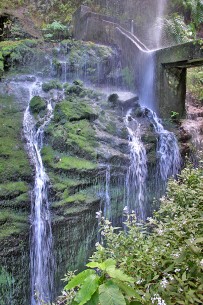 There is an easy-to-walk trail on the edge of the barranco, whose access door may be closed by the visitor centre staff for safety reasons in bad weather. Most of the time, however, it is open.

The path runs along the open channel and there are two small tunnels to cross (torch useful), then it continues for a bit in the stream bed. After a total walking time of about 20 minutes, a magnificent waterfall even awaits visitors in the gorge.

Only when the bananas urgently need to be watered is this spectacle cancelled, as its water is diverted.

In the municipality of San Andrés y Sauces in the northeast of La Palma, it is possible to immerse oneself in a primeval forest that only exists in a few places.

It once covered large parts of Europe, but the Laurisilva survived the ice age only on Madeira, the Azores and some Canary Islands.

As early as 1983, UNESCO protected the area of Los Tilos as a biosphere reserve

So today, in the most important laurel forest of the Canary Islands, you can admire the species community of its typical plants.

Above all, there is the til (stinking laurel) from which Los Tilos (actually Los Tiles) takes its name. They are joined by Canary Island holly, viñatigo (Canary Island mahogany), barbusano (Canary Island ebony), palo blanco (an olive tree), sanguinero (a buckthorn plant) and spice laurel, whose leaves have an aromatic fragrance when rubbed between the fingers, and the Canary Island bellflower.

Bolle's laurel dove is also at home in the dense foliage, but usually you only hear their calls. Much more trusting are the La Palma chaffinches.

Thanks to numerous springs and the rainfall of the trade wind clouds, the evergreen laurel forest resembles a jungle with thick lianas, mosses, giant ferns and rare wild flowers.

Especially in winter, water often drips from the steep rock faces and it is easy to imagine how the precious water once rushed through the impressive gorge.